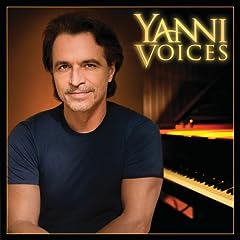 Burbank, CA ? Yanni Voices, the first studio release in 6 years from multi-platinum recording artist Yanni, debuted at #20 on Billboard's Top 200 and #1 on the New Age chart today, marking a career high for the acclaimed composer/pianist. Featuring four extraordinary vocal talents ? Nathan Pacheco, Chloe, Ender Thomas and Leslie Mills ? Voices is the first release in Yanni's career to prominently feature vocals and the first time lyrics have been put to his classic compositions.

Teaming with Grammy and Academy Award-winning producer Ric Wake (Chicago, Celine Dion, Mariah Carey), Yanni spent the past two years putting together the Voices project that also included a highly-touted PBS Special "Yanni Voices: Live From the Forum at Acapulco" which kicked off March pledge, the Yanni Voices CD and a Latin version Yanni Voces which debuted at #2 on Billboard's New Age chart, #5 on the Latin Pop chart and #13 on the Latin overall chart.

On April 10, 2009, Yanni makes his return to the performance stage after a 4-year hiatus. The Yanni Voices tour will feature Yanni's most popular fan favorites accompanied by dynamic visuals, dazzling choreography and show-stopping vocal performances by the four "Voices." The tour will also feature Yanni's acclaimed orchestra comprised of musicians from around the globe.

A Grammy-nominated artist, Yanni's music has been featured in major ad campaigns, films and sporting events including several Olympic Games since 1998. The Greek-born and self-taught musician has distinguished himself as one of the world's top-selling adult contemporary artists, accumulating 35 platinum and gold records worldwide. His concert DVDs "Tribute" and "Live at the Acropolis" both attained multi-platinum status and "Live at the Acropolis" remains the second highest-selling music DVD to date.

Yanni Voices is the inaugural release of the Disney Pearl Series.