last week the new CD of this Parade has been released . 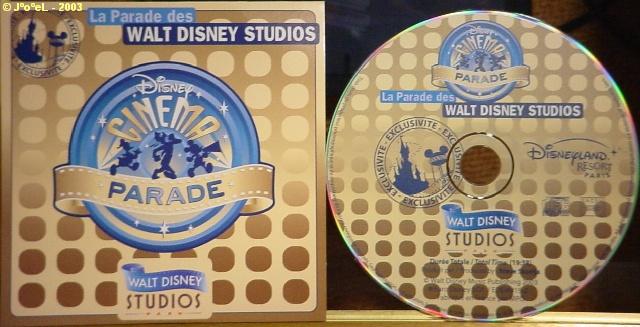 Hey there, Hi there, Ho there,

unbelievable once one goes offline for some weeks suddenly DLRP releases a new CD ... maybe I should go offline more often?? ;-)

Anyway - I don't have the new CD yet and will only go back to DLRP in time for Fantillusion (AP-preview 28th of June, official premiere 5th of July) so I won't be able to provide any detailed infos yet besides the tracklisting:

Yours
Dirk
--- join the magic at DLP.info and the Mousekingdom Blog !...
D

The composer of all original material (Opening Window, Underliner, Lights!!! Camera!!! Action!!!, Closing Window) is credited as "J. Barr"; the rest are well-known Disney tunes by their respective composers.

The only other credit given on the CD is "Produced by Steve Skorija."

The full tracks of each float (plus intro, stop music and finale) are segueing into each other, so it sounds like one track when played back from start to finish. It doesn't have any of the spoken character voices played on the floats, though, and the Finale is also purely instrumental besides the "aaand cut! that's a wrap!" line of the "director."
You must log in or register to reply here.
Share:
Facebook Twitter Reddit Pinterest WhatsApp Email Share Link