Emmy®-Winning Entertainer Draws on Blues, Jazz, Pop and Hip-Hop to Teach Kids About Manners, Health and Just Having Fun 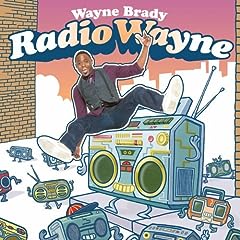 Produced and arranged by the Heavyweights (Jack Kugell, Jamie Jones and Jason Pennock), Radio Wayne features 14 songs, with all of the original tracks co-written by Brady. Touching on a range of musical styles – from jazz and reggae to blues and hip hop – Brady sings about good manners ("Say Please," "Wash Your Hands"), good habits ("Reading Can Be Fun," "You Are What You Eat") and just plain having fun ("Hide and Seek," "Hip Hop Stop").

The project was inspired by the good times Brady has shared with his daughter, Maile, and his commitment to being a parent. "In this day and age, kids are far more mature for good and bad than children of any other generation," says Brady. "You have 6-year-olds who can quote Lady Gaga's lyrics. That's why I did this CD. I wasn't happy with a lot of what my daughter was listening to. We decided to make songs that are as dance-worthy as other Top 40 songs."

Songs on Radio Wayne include:

A multiple Emmy® winner, celebrated comedian and Grammy®-nominated singer, Wayne Brady is one of today's most versatile entertainers. He first burst on the scene as star of the improv comedy show, "Whose Line Is It Anyway?," which led to his hosting "Don't Forget the Lyrics," his own "The Wayne Brady Show," and currently "Let's Make a Deal" on CBS. He's also been a featured guest star on shows like "30 Rock," "How I Met Your Mother" and "Chappelle's Show."

As a singer, Wayne released his solo album debut, [i]A Long Time Coming[/i], in 2008, while making his Disney debut that same year with a cover of "Tiki Tiki Tiki Room" for the [i]Disney Music Block Party[/i] compilation.

Radio Wayne is available exclusively at Amazon. The nationwide release will be available wherever music is sold on May 31.