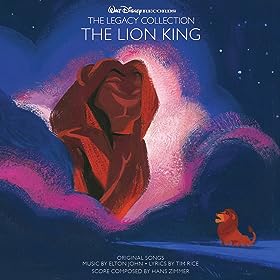 To honor these musical landmarks, Walt Disney Records The Legacy Collection will feature the beloved original soundtracks, plus valuable documentary content that tells the story behind the music. Each album will feature newly created artwork from Lorelay Bove, a visual development artist at Walt Disney Animation Studios ("Tangled," "Winnie the Pooh," "Wreck-It Ralph"). The illustrations, inspired by the original properties, will celebrate Disney's rich heritage and create a unified look for the entire collection.

The release schedule for Walt Disney Records The Legacy Collection is as follows:

This is awesome news! I guess I should check this board more often.

a ) It will finally have more of the score on its soundtrack, and
b ) the score cues will be integrated with the songs, like on Randy's Classic Soundtrack Series.

In many ways, this is like coming full circle for me. I first discovered this board in the late '90s while looking for information on the Classic Soundtrack Series, which I was obsessed with collecting and is still a cornerstone of my CD collection. (My first post on this board, and the entire Internet, was about those Classic Soundtrack CDs).

* It's exciting that Aristocats will finally be getting the deluxe CD treatment!

* I plan on collecting all of these and hope they are successful enough to expand to other deserving classics, such as Snow White, Dumbo, Bambi, Alice, Peter Pan, 101 Dalmatians, Jungle Book, and later include some more that never got the deluxe classic soundtrack treatment, (like Many Adventures of Winnie the Pooh, Song of the South, 3 Cabelleros, etc.)

* As someone who has made ZERO concessions to the download/iPod movement and doesn't feel like I actually own an album unless I have a REAL, physical release, I am thrilled that these will be real, physical CD releases.

Toy Story was not released today and Amazon is advertising the next release as Cinderella on June 23, 2015. No Disneyland either? has anyone heard about a revised release schedule or are these not selling well? So far only The Lion King and The Little Mermaid have released new soundtrack tracks. The others have only included semi-historical tracks, demos, or "deleted" songs.

Paul said:
has anyone heard about a revised release schedule or are these not selling well?
Click to expand...