Anyone else interested in the new boxed set coming out this summer? 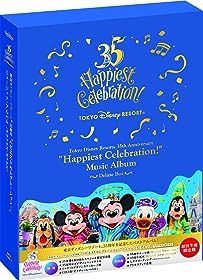 In addition to this one?

Yes, it's a 12 CD box set similar to the "Treasures of Fantasy," 25th anniversary "Dream," the 30th Anniversary "Happiness" compilations. The track list has not been published, but once it has, I'll post it here!

ArturoGarciaJr said:
Anyone else interested in the new boxed set coming out this summer?

Are the songs sung in Japanese?

debvee60 said:
Are the songs sung in Japanese?
Click to expand...

It's a mixed bag. From my experience and very cursory research, music for the Tokyo parks is usually broken down like this:

Sometimes these box sets contain have English-only versions of songs that were played in Japanese inside the parks.

That same link above has the track listings in Japanese for each CD (about halfway down the page.). Using Google Translate gives a good decent translation for most titles.
D

Guys, does this 12 cd set exist? I find it odd its only available via this one website.
"You're dead if you aim only for kids. Adults are only kids grown up, anyway."

It does exist. I received mine. There are multiple "personal shopper" websites based in Japan that are in English. For years, the box set releases could not be sold outside of Japan and will only ship to a Japanese address. The sites are not inexpensive to use. The set has a few good finds but I think the previous set was better. Over time there is more Japanese and less English which makes sense.

disneyboi81 said:
Guys, does this 12 cd set exist? I find it odd its only available via this one website.
Click to expand...

Yes, of course it's real. Hahaha. U-can is a very well-known mail-order/online retailer for decades in Japan. They have had special arrangements with Disney and OLC to release limited box sets for years. This CD set is available only from them. Not at any stores and not sold inside TDR. There have been full-page ads in the DisneyFan Magazines for months. It's all legit.
I