Thor Soundtrack Available on May 3 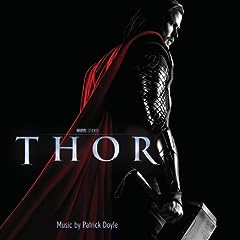 [/floatright]Burbank, CA — Buena Vista Records will release the original motion picture soundtrack for [i]Thor[/i] on May 3, 2011. The album features the original music composed by Patrick Doyle ("Henry V," "Harry Potter and the Goblet of Fire") marking the ninth time Doyle has teamed with director Kenneth Branagh. The score was recorded at Air Lyndhurst Studio in London, and was performed by The London Symphony Orchestra conducted by James Shearman.

Patrick Doyle's long-time creative collaboration with Branagh began in 1989 with "Henry V." The film's song 'Non Nobis Domine' was awarded the 1989 Ivor Novello Award for Best Film Theme. In 1991, they re-teamed for "Dead Again," which earned Doyle a Golden Globe®-nomination. Subsequent collaborations include "Frankenstein," "Much Ado About Nothing," "Love's Labour's Lost," "As You Like It," "Hamlet" (for which Doyle received an Oscar® nomination for Best Original Score), and "Sleuth."

"I have always been a great fan of fantasy journals and an even bigger fan of the Marvel movies," said composer Patrick Doyle. "I was extremely excited to be asked by Kenneth Branagh to compose the score for Thor and to be part of the hugely successful Marvel stable was thrilling."

The epic adventure Thor spans the Marvel Universe from present day Earth to the mystical realm of Asgard. At the center of the story is The Mighty Thor, a powerful but arrogant warrior whose reckless actions reignite an ancient war. As a result, Thor is banished to Earth where he is forced to live among humans. When the most dangerous villain of his world sends its darkest forces to invade Earth, Thor learns what it takes to be a true hero.

Director Branagh comments, "Thor is big...The Man, or should I say, the God is big... The sets are big. Space is big... So when it comes to the music, does size really matter? The answers are here for you to listen to, and they include 'big' memorable movie themes, contemporary percussion and rhythm, pace and attack, modesty when required, and a dose of Viking primitivism for seasoning."

"The score for Thor was immensely enjoyable and challenging," described Doyle, "requiring a consistent symphonic and contemporary tone as its gripping narrative flew between two worlds from Earth to Asgard. It required very strong emotional moments dealing with the family conflicts intertwining Thor Loki and Odin, the Thor and Jane gentle love story, and the delightful light humorous moments throughout."

Paramount Pictures and Marvel Entertainment present Thor, in theaters on May 6, 2011. Thor original motion picture soundtrack will be available wherever music is sold on May 3, 2011.