Two Disc Collection Features 59 Songs, Over 2½ Hours of Music, 26 Rare Tracks, Plus 9 Tracks Available on CD for the First Time 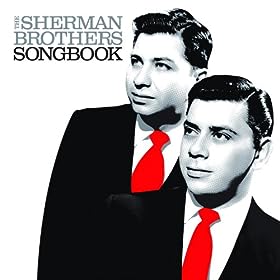 Burbank, CA — On October 13, 2009 Walt Disney Records releases a two-disc retrospective collection of music by award-winning songwriting team, Robert Sherman and Richard Sherman. Hired by Walt Disney himself as his first and only staff songwriters, the Sherman Brothers music has been an important part of motion pictures, theme park attractions, television productions, records, compact discs, and Broadway shows – entertaining millions of people all over the world.

The two-disc set includes 59 songs highlighting the Sherman Brothers' incredibly prolific Disney years – from Annette's 1959 hit "Tall Paul" to their work from The Tigger Movie in 2000. Newly restored with the latest digital technology, this collection features not only their landmark hits from Mary Poppins, Winnie the Pooh, The Jungle Book, and "it's a small world," but a number of their other classics – many available for the first time on CD.

Their voluminous repertoire is only matched by their musical versatility – composing in styles from Rock 'n Roll and English Music Hall to Samba and March. These genres and more are represented throughout the Sherman Brothers' Disney career. The extensive liner notes reveal the stories behind the songs and are illustrated with candid photos of the Shermans at work, and also with the star-studded gallery of artists who performed their classic songs.

Artist highlights include Annette Funicello ("Tall Paul" and "Pineapple Princess"), Hayley Mills ("Let's Get Together"), Annette and The Beach Boys ("The Monkey’s Uncle"), Louis Prima ("I Wan'na Be Like You"), Louis Armstrong ("Ten Feet off the Ground"), and Maurice Chevalier ("The Aristocats"), plus beloved songs from Mary Poppins featuring Julie Andrews and Dick Van Dyke ("Chim Chim Cher-ee," "Supercalifragilisticexpialidocious") and many others. The collection also includes three bonus tracks from the 1969 Disneyland Records release of Chitty Chitty Bang Bang performed by The Mike Sammes Singers.

Among the 150-plus Disney songs that Robert and Richard Sherman co-wrote are more than 35 songs for Annette; the songs and oftentimes score to such classic films as Mary Poppins, The Jungle Book, The Aristocrats and Winnie the Pooh; and it’s a small world, one of the many unforgettable tunes for Disney's Theme Park attractions. Between 1961 and 1974, the Shermans penned the songs for 28 Disney films, wrote music for Disneyland and Walt Disney World attractions, and composed songs for 25 Disney television shows including The Horsemasters, and the theme from The Wonderful World of Color. During the course of their career, the Shermans received two Academy Awards and two Grammy Awards for Mary Poppins as well as numerous other Academy nominations over the years.

Throughout their long association with The Walt Disney Company, The Sherman Brothers proved to be one of the most creative, influential and prolific songwriting teams. The Sherman Brothers Songbook documents the extraordinary career of Robert and Richard Sherman and celebrates an unquestionable standard in popular music. With their genius for songwriting and storytelling, the Shermans will always be part of the magic of Disney.

Jay - I picked this up at the Writer's Stop in DHS. This is, by far, one of my favorite Thornton projects. The sound is fantastic, liner notes are very useful, and an excellent purchase for anyone who loves Richard and Robert's work.
There's a great big, beautiful tomorrow . . .
You must log in or register to reply here.
Share:
Facebook Twitter Reddit Pinterest WhatsApp Email Share Link