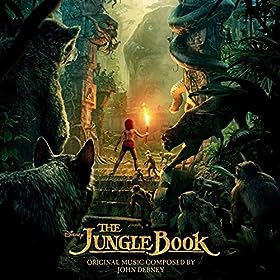 CD   iTunes   MP3
Burbank, CA — Walt Disney Records releases The Jungle Book soundtrack, featuring score by award-winning composer John Debney ("Iron Man 2"), the end-credit tracks including "Trust in Me" performed by Scarlett Johansen and produced by Mark Ronson, "I Wan'na Be Like You" performed by Christopher Walken, plus Dr. John & The Nite Trippers' rendition of "The Bare Necessities." The original music was composed and produced by John Debney. The original motion picture soundtrack will be available wherever music is sold today, April 15, 2016.

Directed by Jon Favreau ("Iron Man"), based on Rudyard Kipling's timeless stories and inspired by Disney's classic animated film, "The Jungle Book" is an all-new live-action epic adventure about Mowgli (newcomer Neel Sethi), a man-cub who's been raised by a family of wolves. "The Jungle Book" seamlessly blends live-action with photorealistic CGI animals and environments, using up-to-the-minute technology and storytelling techniques to immerse audiences in an enchanting and lush world. The wild adventure swings into theaters in 3D on April 15, 2016.

With its roots in classic Disney animation, Jon Favreau's epic live-action version of "The Jungle Book" called for a powerful score. Veteran composer John Debney brought his award-winning sensibilities to the film--along with a notable history as part of the Disney family.

"I have quite a history with Disney," says Debney, whose father Louis Debney was hired by Walt Disney himself in the mid-1930s. "When I was a youngster, they were making this incredible magical film called 'The Jungle Book,' and I was sort of a studio brat. I got to know the young man Bruce Reitherman who played Mowgli. We would go on adventures around the world with his family." When John was a boy he got to spend the day with the Sherman Brothers at the lot and decided then, that he would create music for films too.

According to Debney, the plan from the get-go was to create a classic score reminiscent of the 1967 film. "Jon [Favreau] wanted a timeless sound to the score and I embraced that," says the composer. "That's where I come from. I love writing really rich, beautiful Disney-esque music."

Favreau wanted to pay homage to the original in a subtle way. "We were able to reinterpret and highlight snippets of the songs we all know and love," says Debney. "I couldn't believe I'd get to work with Dick and Bob Sherman's music. I think it's really smart to embrace these amazing, classic tunes--yet bring them into this new interpretation of the story in our own way."

The Jungle Book soundtrack is now available at iTunes, Amazon, streaming services, and wherever music is sold.