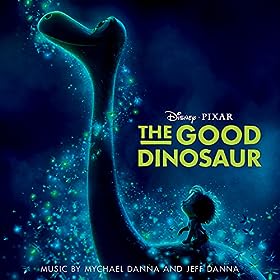 "The Good Dinosaur" takes Arlo—and the audience—on an emotional journey of self-discovery. Filmmakers opted to tell the story in a new way, relying less on dialogue, while leaning into the power of nature, compelling characters and music that captures the imagination. "It's a dinosaur movie, so the music needs to be big," says director Peter Sohn. "But it's also that classic boy-and-his-dog story embarking on a journey home. That calls for a certain sensitivity to embrace the emotions. Mychael and Jeff are brilliant artists when it comes to setting up a theme that can be sweet and hopeful one moment and strong and powerful the next. And they do it in a unique way."

"Pixar sets the bar for animation—they set the bar for imagination," says Mychael Danna. "So we wanted to do something different, blending traditional instrumentation and a melody-centered approach with alternative world music instruments. We draw from everywhere—historically and geographically—to help tell this story."

Instruments utilized range from classic strings, percussion and brass to the unexpected. "We used some pre-Colombian instruments that reflected the landscape around the characters," says Jeff Danna. "We used a lot of unusual string-guitar instruments that are primitive or folky: a bouzouki, a long-necked Greek instrument that's like a mandolin; the Turkish cumbus; the Iranian saz; and a Nordic instrument called a harpolek. They're really interesting when placed into the refined world of the orchestra. Our approach to many of the things in the film was to take the expected or standard thing and, just like the movie did, turn it a little sideways."

About Disney•Pixar's "The Good Dinosaur"
"The Good Dinosaur" asks the question: What if the asteroid that forever changed life on Earth missed the planet completely and giant dinosaurs never became extinct? Pixar Animation Studios takes you on an epic journey into the world of dinosaurs where an Apatosaurus named Arlo (voice of Raymond Ochoa) makes an unlikely human friend. While traveling through a harsh and mysterious landscape, Arlo learns the power of confronting his fears and discovers what he is truly capable of.

About Mychael Danna:
Mychael Danna is an Academy Award-winning film composer recognized for his evocative blending of non-western traditions with orchestral and electronic music. Among his body of work includes his Oscar-winning score for Ang Lee's Life of Pi and his many Genie Award-winning scores for director and longtime collaborator Atom Egoyan.

Other celebrated collaborations include those with Bennett Miller on his multiple Oscar-nominee Moneyball (2011) and his Oscar-winning drama Capote (2005); with Terry Gilliam on his Oscar-nominated The Imaginarium of Doctor Parnassus (2009) and Tideland (2005); with Mira Nair on Vanity Fair (2004), Monsoon Wedding (2001) and Kama Sutra: A Tale of Love (1996); and with Billy Ray on Breach (2007) and Shattered Glass (2003).

For television, Mychael and Jeff Danna write the original music for the FX series Tyrant. Mychael is a double Emmy nominee this year, his third and fourth Emmy nomination overall, nominated in the categories of Outstanding Music Composition for a Series (Original Dramatic Score) and Outstanding Original Main Title Theme Music for Tyrant. Mychael was previously nominated before for Camelot and won for Outstanding Music Composition for a Miniseries, Movie or a Special (Original Dramatic Score) for World Without End.

About Jeff Danna:
Jeff has created scores for a long and varied list of films. His credits include such diverse projects as the hit film adaptations of the video game/action franchises Resident Evil: Apocalypse and Silent Hill 1 and Silent Hill 2; the Ryan Gosling-Anthony Hopkins legal drama Fracture; The Imaginarium of Dr. Parnassus and Tideland, which were both directed by Terry Gilliam; Lakeview Terrace directed by Neil LaBute; a series of films for director Brett Morgen, including The Kid Stays in the Picture and Chicago 10; Closing the Ring for director Richard Attenborough; and the cult classic The Boondock Saints, among others.

Additionally, his collaborative Orchestral Celtic albums with brother composer Mychael Danna have enjoyed worldwide success and placed in the Top Ten on the Billboard chart in the United States.

Recently, Jeff scored Brett Morgen's Kurt Cobain biopic Montage of Heck which premiered in Sundance and was released on HBO in May 2015. He wrote the music for Tim Blake Nelson's upcoming Anesthesia starring Kristen Stewart and Glenn Close.