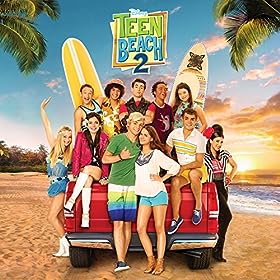 Reprising their singing and dancing roles are the multi-talented young cast, including Ross Lynch ("Austin & Ally" and Hollywood Records' R5) as Brady, Maia Mitchell ("The Fosters") as McKenzie ("Mack"), Grace Phipps ("Baby Daddy") as Lela, Garrett Clayton ("The Fosters") as Tanner, John DeLuca ("Twisted") as Butchy, Jordan Fisher (Hollywood Records recording artist) as Seacat, Mollee Gray ("So You Think You Can Dance") as Giggles, Chrissie Fit ("Pitch Perfect 2") as Cheechee, Jessica Lee Keller ("Dancing with the Stars") as Struts, William Loftis ("Teen Beach Movie") as Lugnut, and Kent Boyd ("So You Think You Can Dance") as Rascal. Joining the cast are Piper Curda ("I Didn't Do It") as Alyssa, Raymond Cham, Jr. ("Jessie") as Devon and Ross Butler ("K.C. Undercover") as Spencer.

The "Teen Beach 2" soundtrack will be available wherever music is sold on June 23rd.