Pirates of the Caribbean: On Stranger Tides Soundtrack Available on May 17 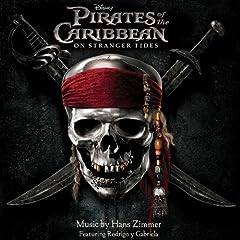 Hans Zimmer is one of the film industry's most respected and sought-after composers with a career that encompasses more than 100 film and television scores. An Academy Award® winner for his score for "The Lion King," Zimmer has also received eight additional Oscar® nominations for his work including "Inception," "Sherlock Holmes," "Gladiator," "The Thin Red Line," "Rain Man," "As Good as It Gets," "The Preacher's Wife," and "The Prince of Egypt." Other recent credits include "Rango," "The Dark Knight," and "Batman Begins." Among his many honors, Zimmer has also won two Golden Globes® and four Grammy Awards®.

Pirates of the Caribbean: On Stranger Tides has a distinctive Latin flavor. Zimmer said, "We have Penelope Cruz playing Angelica, who's Spanish, so I felt that there could be some Latin influences in the score for On Stranger Tides."

To achieve this, Zimmer reached out to Rodrigo y Gabriela. "I've been a big fan of Mexican guitarists Rodrigo y Gabriela for years now," said Zimmer, "and I asked them if they wanted to come and play with us. We've been having a really great time with them being part of the musical world this film gets to inhabit."

Rodrigo y Gabriela are considered the premier guitar-playing duo in the world. They have sold over one million albums, have sold out arenas and headlined festivals worldwide, and in 2010 they were invited to share the stage with Beyonce for a state dinner at the White House. The collaboration with Hans Zimmer is their first film score—an exciting and defining moment in their career. Their willingness to explore musical expression and to embrace new sounds irrespective of fashion or trends, as well as their point blank refusal to be pigeonholed as any particular genre, is the very foundation of Rodrigo y Gabriela.

For a key scene in the film, featuring a highly choreographed Tango between Johnny Depp and Penelope Cruz, Hans Zimmer collaborated not only with Rodrigo y Gabriela but also Eduardo Cruz —Penelope's brother, an up-and-coming composer/songwriter. Also imparting a Latin flavor to the music is legendary jazz great Arturo Sandoval. The Cuban born, four-time Grammy® Award–winner is the featured trumpet player for the score.

Produced by Jerry Bruckheimer and directed by Rob Marshall, Pirates of the Caribbean: On Stranger Tides captures the fun, excitement and humor that ignited the hit franchise—this time in Disney Digital 3D™. Johnny Depp returns to his iconic role of Captain Jack Sparrow in this action-packed adventure that finds him crossing paths (and swords) with the enigmatic Angelica (Penelope Cruz). When she forces him aboard the "Queen Anne's Revenge," the ship of the legendary pirate Blackbeard (Ian McShane), Jack finds himself on an unexpected journey to the fabled Fountain of Youth. Along the way Jack must use all his wiles to deal with the barbarous Blackbeard and his crew of zombies, Angelica, the ravishing pirate with whom he shares a dubious past, and the beautiful, enchanting mermaids whose masterful cunning can lure even the most seasoned sailor to his doom. The international cast includes franchise vets Geoffrey Rush as the indestructible Captain Hector Barbossa and Kevin R. McNally as Captain Jack's longtime comrade Joshamee Gibbs, plus Sam Claflin as a stalwart missionary and Astrid Berges-Frisbey as a mysterious mermaid.

Walt Disney Pictures' and Jerry Bruckheimer Films' Pirates of the Caribbean: On Stranger Tides opens in theaters May 20, 2011, in Disney Digital 3D™, with screen story and screenplay by Ted Elliott & Terry Rossio, based on characters created by Ted Elliott & Terry Rossio and Stuart Beattie and Jay Wolpert, and suggested by the novel by Tim Powers.

Pirates of the Caribbean: On Stranger Tides original motion picture soundtrack will be available wherever music is sold on May 17, 2011.

Playlist Author
I love these scores, but I am somewhat disappointed by the amount of "remixes" included, rather than actual score pieces. Hopefully one day Disney will give these scores the Lord of the Rings treatment and release the full scores.

Premium Member
Playlist Author
The Soundtrack was available to purchase in the UK today (16 May 2011) - overall it's very good but I agree with the comment regarding remixes. Hopefully they may release an extended score version.
All your dreams can come true if you have the courage to pursue them.

needmagic said:
The Soundtrack was available to purchase in the UK today (16 May 2011) - overall it's very good but I agree with the comment regarding remixes. Hopefully they may release an extended score version.
Click to expand...

Playlist Author
The full score was awesome, at least if you liked the prior scores. I just received the official release in the mail, and while I am looking forward to listening to it, the amount of remix material included is a waste of space. There is a lot of music in the film.

Premium Member
Playlist Author
I totally agree about the included remixes - but I may be of an age group that doesn't appreciate that sort of music genre. I haven't seen the film yet (I'm recovering from a recent hernia operation) but plan to in the next few weeks - looking forward to it though!
All your dreams can come true if you have the courage to pursue them.
You must log in or register to reply here.
Share:
Facebook Twitter Reddit Pinterest WhatsApp Email Share Link