Phineas and Ferb: Across the 1st and 2nd Dimensions Available on August 2

The collection includes new music from Disney Channel Original Movie "Phineas and Ferb: Across the 2nd Dimension" plus songs from the #1 Emmy Award-winning animated series. 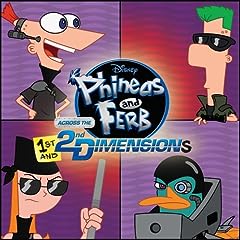 [/floatright]Burbank, CA — Walt Disney Records is set to release the soundtrack to [I]Phineas and Ferb: Across the 1st and 2nd Dimensions[/I] on August 2, 2011. The album features 7 new songs ("Everything's Better with Perry," "Brand New Best Friend," "Summer (Where Do We Begin?)," "Taking Care of Things," "Mysterious Force," "Robot Riot") and the end credit track "Kick It Up a Notch," the Phineas and Ferb collaboration with legendary guitarist Slash. The soundtrack also includes 15 songs from the hit animated series. The Disney Channel Original Movie "Phineas and Ferb: Across the 2nd Dimension" premieres Friday, August 5 (8 p.m., ET/PT), on Disney Channel: Saturday, August 13, on Disney XD: and also on the ABC Television Network (date TBD).

The "Kick It Up a Notch" music video opens with a live-action segment of Slash plugging his Gibson Les Paul guitar into an amp. An electric current travels through the wire and Slash becomes animated and is joined on stage by Phineas and Ferb. The video will debut July 22nd on Disney Channel.

In this animated adventure — based on Disney Channel's Emmy Award-winning comedy series "Phineas and Ferb" — stepbrothers Phineas and Ferb go on their biggest journey yet, into another dimension! When the boys finally discover that their beloved pet platypus Perry is in fact a secret agent who battles the forces of evil daily, they join him on a grand adventure that blasts them to another dimension where a truly evil Dr. Doofenshmirtz has taken over an alternate Tri-state Area. When they uncover his ploy to travel back to their dimension to take over their Tri-state Area, the gang, as well as their alter-egos, must band together to stop him. "Phineas and Ferb: Across the 2nd Dimension" was executive-produced by Dan Povenmire and Jeff "Swampy" Marsh ("The Simpsons," "Family Guy").

Povenmire and Marsh said, "We're thrilled about the music in 'Phineas and Ferb: Across the 2nd Dimension.' Music plays a big role in the movie just like the series. We always try to pepper in songs whenever we can to hook the audience in and a song gets you emotionally a lot quicker sometimes than dialogue would. It's part of what makes things memorable about the show."

On the collaboration with Slash, Povenmire added, "Slash is a rock icon, he's our hero. We wanted a song that encapsulated the feeling of the series as well as the movie. Slash saw the movie with his kids and he liked it so much, he said, 'Hey, let's write a song together!' It was really a dream come true."

The relationship between Slash and the show creators was brokered by entertainment marketing consultant Al Hassas, who has played an instrumental role in building marketing alliances for Slash during the last few years.

Slash said, "I'm a big fan of 'Phineas and Ferb.' I watch a lot of cartoons and I think it's one of the best shows. It's well-written, very original and the characters are great. This whole experience has been surreal because I'm a big Disney fan. To be involved in this movie and having written some music for it is pretty exciting. It's an honor to actually be animated in the 'Kick It Up a Notch' music video."

On his collaboration with the show creators and composer, Slash added, "Working with Dan, Swampy and Danny Jacobs was just great. Very talented couple of guys. It was really easygoing. I had a guitar riff and they came up with lyrics and melodies instantaneously. Kids will dig it 'cause it has a lot of energy and the song has a great hook."

Slash is widely considered one of the greatest rock guitar players of all time. He has received countless accolades and awards including a 2007 induction into Hollywood's RockWalk (located in front of Guitar Center in Hollywood) alongside his idols Jimmy Page and Jimi Hendrix. An original member of iconic rock band Guns N' Roses, the Grammy-winning Slash helped the band create signature sounds like the guitar riff of #1 hit "Sweet Child o' Mine" and "Welcome to the Jungle." The band dominated the 1980s and 90s music scene selling more than 100 million albums worldwide and ushered in a decade of hard charging rock music. After leaving the band, Slash went on to critical acclaim in his personal project Slash's Snakepit, and global success with supergroup Velvet Revolver. He has been widely sought after by the biggest musicians of all time, performing with everyone from Michael Jackson to Stevie Wonder to Ray Charles. Slash recently landed on the top of the charts with his first true solo album, Slash. In addition, Slash was just honored by the Hollywood Chamber of Commerce who named him as an official selection for 2011 to receive a star on Hollywood's iconic Walk of Fame. Slash is currently in the studio working on his second solo album due for release in 2012.

Phineas and Ferb: Across the 1st and 2nd Dimensions soundtrack is available August 2, 2011, wherever music is sold.