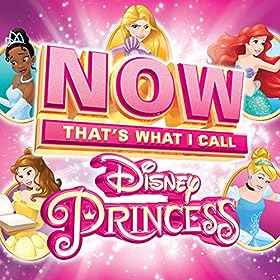 Building on the success of three previously released NOW That's What I Call Disney volumes, NOW That's What I Call Disney Princess features 20 favorite musical moments that have been enchanting and entertaining audiences for generations, including "Part of Your World" from The Little Mermaid, "A Whole New World" from Aladdin, "Someday My Prince Will Come" from Snow White and the Seven Dwarfs, "Colors of the Wind" from Pocahontas, "Beauty and the Beast" from Beauty and the Beast, "Reflection" from Mulan, "A Dream Is a Wish Your Heart Makes" from Cinderella, "Waiting for My Prince" from Disney Princess Tea Party, and many more.

Track List:
About NOW That's What I Call Music!
The NOW That's What I Call Music! series debuted in the U.S. in 1998, following 15 years of multi-platinum international success. The series has generated sales exceeding 250 million albums worldwide, including more than 96 million in the U.S. alone. All 55 previous releases in NOW's numeric U.S. series have reached Billboard's Top 10, and 19 volumes have reached No. 1.