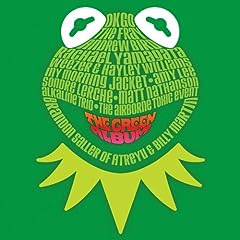 [/floatright]Burbank, CA — It just got a whole lot easier being green. Walt Disney Records is set to release [i]Muppets: The Green Album[/i], a musical tribute to the world's much-loved Muppets, featuring 12 fan favorite songs reinterpreted by today's hottest artists. Appearing on the album are bands such as OK Go, Weezer, The Fray, Alkaline Trio, My Morning Jacket, as well as solo artists like Andrew Bird, Matt Nathanson and Amy Lee. Muppets: The Green Album will be released on August 23rd.

Following the release of Muppets: The Green Album, is Disney's highly anticipated comedy "The Muppets" arriving this Thanksgiving on the big screen with Jason Segel, Amy Adams and Chris Cooper in a brand new Muppet adventure that will captivate moviegoers of all ages. The original motion picture soundtrack for "The Muppets" will be released by Walt Disney Records on November 22.

Songs included on Muppets: The Green Album are:

1. A raucous rock version of "The Muppet Show Theme" performed by the award-winning quartet OK Go.

3. "Mahna Mahna" - A memorable track from "The Muppet Show," originally done by Mahna Mahna and the Snowths, here performed by multi-Grammy nominated Chicago band The Fray.

4. "Moving Right Along" - Alkaline Trio puts a punk-pop spin on this favorite from "The Muppet Movie."

6. "Halfway Down the Stairs" - Former Evanescence singer Amy Lee turns in a haunting rendition of a song performed by Kermit's nephew Robin on "The Muppet Show." The track was a Top 10 hit in the UK.

8. "Wishing Song" - Indie band The Airborne Toxic Event turns in a dark take on a song from "The Muppet Show" (originally sung by The Great Gonzo).

9. "Night Life" - a song from the film "The Great Muppet Caper" (1981) performed with hard rock abandon by Brandon Saller of Hollywood Records band Atreyu and Billy Martin of Good Charlotte.

11. "I Hope That Something Better Comes Along" - Another winsome track from "The Muppet Movie," sung here by San Francisco singer/songwriter Matt Nathanson.

12. "I'm Going to Go Back There Someday" - Singer Rachael Yamagata closes the album with her gentle interpretation of this ballad from "The Muppet Movie."

About the Muppets Studio

For more than 55 years, the Muppets have entertained film and television audiences with their blend of heart and humor. The creation of the late visionary, Jim Henson, the Muppets are among the world's most recognized and beloved characters, led by the world's most famous amphibian, Kermit the Frog. Since The Muppets Studio joined The Walt Disney Company in 2004, the Muppets have starred in a series of award-winning viral music videos, multiple television specials, attractions and appearances at Disney Parks, and have an array of Muppets merchandise.

About the Upcoming Movie — Disney's "The Muppets"

On vacation in Los Angeles, Walter, the world's biggest Muppet fan, and his friends Gary (Jason Segel) and Mary (Amy Adams) from Smalltown, USA, discover the nefarious plan of oilman Tex Richman (Chris Cooper) to raze the Muppet Theater and drill for the oil recently discovered beneath the Muppets' former stomping grounds. To stage The Greatest Muppet Telethon Ever and raise the $10 million needed to save the theater, Walter, Mary and Gary help Kermit reunite the Muppets, who have all gone their separate ways: Fozzie now performs with a Reno casino tribute band called the Moopets, Miss Piggy is a plus-size fashion editor at Vogue Paris, Animal is in a Santa Barbara clinic for anger management, and Gonzo is a high-powered plumbing magnate. With secret, signature, celebrity cameos, Disney's "The Muppets" hits the big screen Nov. 23, 2011.

Muppets: The Green Album will be available wherever music is sold on August 23, 2011.