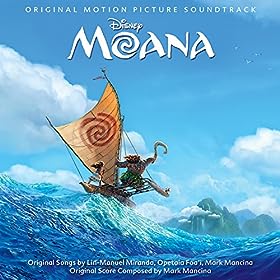 The diverse and dynamic team behind the film's inspired music includes Tony®-, Emmy®- and Grammy®-winning songwriter/composer Lin-Manuel Miranda, who counts among his credits Broadway's Pulitzer Prize-winning and multiple Tony-winning "Hamilton" and the Tony-winning "In the Heights," three-time Grammy®-winning composer Mark Mancina ("Speed," "Tarzan" and the Oscar®-winning "Training Day") and Opetaia Foa'i, the founder and lead singer of Te Vaka, a winner of numerous world music awards.

Miranda said, "Moana has a family that she loves, an island that she loves, but there's a voice inside that's calling. The idea of quieting life enough so that you can hear that inner voice was something really worth writing about for me because I think it's so important."

According to Mancina, the music is designed to propel the story. "Music is like a gigantic magnifying glass when it comes to the emotion of a story," said Mancina. "It can enhance it; it can manipulate the story—you have to be very careful. I like to leave a theater with those tunes in my head. And if I still have them in there the next day, I'm really happy."

Opetaia Foa'i added, "For more than 20 years, I've been touring the world telling stories of our ancestors, who were the best navigators the world has ever seen. When I first learned that 'Moana' was about voyaging, I thought 'when you dream upon a star.' Everything really aligned with my purpose of sharing this awesome culture."

The Songs of Moana:
For centuries, the greatest sailors in the world masterfully navigated the vast Pacific, discovering the many islands of Oceania. But then, 3,000 years ago, their voyages stopped for a millennium – and no one knows exactly why. From Walt Disney Animation Studios comes "Moana," a sweeping, CG-animated feature film about an adventurous teenager who is inspired to leave the safety and security of her island on a daring journey to save her people. Inexplicably drawn to the ocean, Moana (voice of Auliʻi Cravalho) convinces the mighty demigod Maui (voice of Dwayne Johnson) to join her mission, and he reluctantly helps her become a wayfinder like her ancestors who sailed before her. Together, they voyage across the open ocean on an action-packed adventure, encountering enormous monsters and impossible odds, and along the way, Moana fulfills her quest and discovers the one thing she's always sought: her own identity.

The Moana original motion picture soundtrack features 14 tracks and is available wherever music is sold and streamed on Nov. 18, 2016. The Moana two-disc deluxe edition and the digital deluxe edition soundtrack, which are also available Nov. 18, feature additional tracks including demos, outtakes and instrumental karaoke tracks.