"Lady And The Tramp" Soundtrack

Has anybody listened to the "Lady And the Tramp" soundtrack? I have the it CD from 1997, but the original LP on the Disneyland label back in the early 60's features updated versions with orchestra arranged and conducted by Tutti Camarata. Features vocals by Teri York and Bob Grabeau. That might be a collector's item, I might try to find it in Goodwill and the Salvation Army thrift stores soon or maybe at a flea market before spring comes if the weather gets warmer. I have the story of "Lady And the Tramp" from 1962 it was told by Ginny Tyler as Lady. It was a die-cut "Magic Mirror" on the front and it doesn't have a picture of Lady and Tramp on the front because someone has torn off the page. The record is in fair condition, a few scratches were there. Here is the pic of the LP I have. 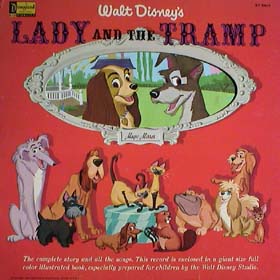 I might try to get this soundtrack LP soon if I could show you another LP cover from the front and back of the "Lady And the Tramp" soundtrack from 1962.

I hope that the cover for the soundtrack LP will be included on the "Mouse Tracks" book next month. Any suggestions?
"musicradio77" on Stickam

I have the second album you have pictured (front/back).
I loved the artwork on it so I framed it. I have no idea what the music sounds like! LOL
I think someone gave it to me in a stack of albums!

The 1962 LADY AND THE TRAMP "studio cast" album conducted by Tutti Camarata is on CD as part of the Wonderland Music CD burning system at Disneyland and Walt Disney World. You get all eight songs and the artwork from the DQ-1231 version you have pictured above (what I affectionately call the "beach ball" cover).

By the way, the album cover has a slight error, which we discovered as we interviewed Teri York for MOUSETRACKS. She did not recall singing "What is a Baby?" and "Peace on Earth," and upon closer attention, we realized that it is Marilyn Hooven on those tracks, even though the cover listing credits Teri. Also, the "Siamese Cat Song" is listed on some covers as by "Si and Am," while the Wonderland CD correctly credits Robie Lester.
You must log in or register to reply here.
Share:
Facebook Twitter Reddit Pinterest WhatsApp Email Share Link