Inside Out Soundtrack Available on June 16 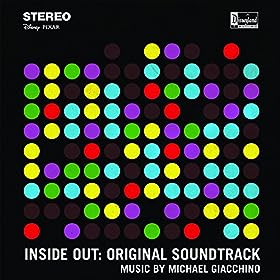 Burbank, CA — Disney•Pixar's "Inside Out" features an original score that captures the emotional spirit of the story by award-winning composer Michael Giacchino. The soundtrack will be released by Walt Disney Records on June 16, 2015. Directed by Academy Award® winner Pete Docter ("Monsters, Inc.", "Up") and produced by Jonas Rivera, p.g.a. ("Up"), Disney•Pixar's "Inside Out" opens in U.S. theaters on June 19, 2015.

Giacchino worked with director Pete Docter on "Up" (garnering an Academy Award® for best original score) and also counts Disney•Pixar's films "Cars 2," "Ratatouille," and "The Incredibles" among his credits. But, says the composer, "Inside Out" was different. "Pete [Docter] wanted the music to feel as if it was coming from the inside—from internal thoughts," says Giacchino. "We were going for something atmospheric. Something that wasn't traditional film score."

The score was recorded with a 70-piece orchestra with an organ and a rhythm section that consisted of guitars and a drummer.

"I had a lot of fun writing the music," continues Giacchino. "There's a 1930s jazzy section we wrote for the Forgetters, and we channel classic horror in the Subconscious. The film really goes all over the map musically, but what I love most about it is that we never forgot that it's an emotional story that's being told."

"Inside Out" is preceded by the short "LAVA" from Pixar Animation Studios, director James Ford Murphy and producer Andrea Warren. Inspired by the isolated beauty of tropical islands and the explosive allure of ocean volcanoes, "LAVA" is a musical love story that takes place over millions of years. The short features the theme performed by Kuana Torres Kahele (Uku & Narrator) and Napua Greig (Lele). The "Lava" score will be available at digital retail on June 16, 2015.

Do you ever look at someone and wonder what is going on inside their head? Disney•Pixar's original new film "Inside Out" ventures inside the mind to find out.

Based in Headquarters, the control center inside 11-year-old Riley's mind, five Emotions are hard at work, led by lighthearted optimist Joy (voice of Amy Poehler), whose mission is to make sure Riley stays happy. Fear (voice of Bill Hader) heads up safety, Anger (voice of Lewis Black) ensures all is fair and Disgust (voice of Mindy Kaling) prevents Riley from getting poisoned—both physically and socially. Sadness (voice of Phyllis Smith) isn't exactly sure what her role is, and frankly, neither is anyone else.

When Riley's family relocates to a scary new city, the Emotions are on the job, eager to help guide her through the difficult transition. But when Joy and Sadness are inadvertently swept into the far reaches of Riley's mind—taking some of her core memories with them—Fear, Anger and Disgust are left reluctantly in charge. Joy and Sadness must venture through unfamiliar places—Long Term Memory, Imagination Land, Abstract Thought and Dream Productions—in a desperate effort to get back to Headquarters, and Riley.

Michael Giacchino has credits that feature some of the most popular and acclaimed film projects in recent history, including "The Incredibles," "Ratatouille," "Mission Impossible: Ghost Protocol," and "The Dawn of the Planet of the Apes." Giacchino's 2009 score for the Pixar hit "Up" earned him an Oscar®, a Golden Globe®, the BAFTA, the Broadcast Film Critics' Choice Award and two GRAMMY® Awards.

Additional projects include collaborations with Disney Imagineering on music for Space Mountain, Star Tours (with John Williams), and the Ratatouille ride in Disneyland Paris. Giacchino also was the Musical Director of the 81st Annual Academy Awards®. Currently, his music can be heard in concert halls internationally with both "Star Trek" and "Star Trek Into Darkness" films being performed live-to-picture with a full orchestra.

This summer, in addition to Pete Docter's "Inside Out" from Disney•Pixar, Giacchino has two other major films hitting theaters: "Tomorrowland," directed by Brad Bird and Universal's "Jurassic World," directed by Colin Trevorrow.

The "Inside Out" original motion picture soundtrack will be available wherever music is sold on June 16, 2015.