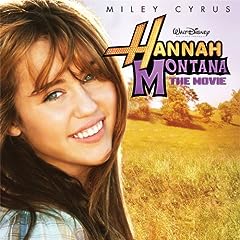 Burbank, CA ? For Hannah Montana and Miley Cyrus fans worldwide the wait is nearly over. The eagerly anticipated "Hannah Montana: The Movie," arrives in movie theaters April 10. Setting the stage for the film's premiere is the Walt Disney Records soundtrack CD, which features 18 tracks ? including 14 brand new songs ? performed by Miley, Billy Ray Cyrus, Taylor Swift, Rascal Flatts and Steve Rushton. The CD arrives in stores March 24, while the debut single, "The Climb," by Miley Cyrus, is already #6 on Billboard's Hot 100 chart.

The fun-filled adventure film stars Miley along with real-life father Billy Ray Cyrus, Vanessa Williams ("Ugly Betty") and all of Miley's young co-stars of "Hannah Montana." The Walt Disney Records soundtrack boasts plenty of pop gems, including "You'll Always Find Your Way Back Home" (co-written by Taylor Swift), "Let's Get Crazy," "The Good Life," "Let's Do This," "Spotlight," "What's Not to Like," and a new version of "The Best of Both Worlds," all performed by Miley as Hannah Montana; "The Climb" (Produced by John Shanks), "Don't Walk Away," "Dream," and "Hoedown Throwdown" by Miley Cyrus; and "Butterfly Fly Away," a tender and unforgettable duet by Miley and Billy Ray, produced by Glen Ballard.

Also included, the hit single "Back to Tennessee" by Billy Ray Cyrus (it's also the title track from his upcoming solo CD); multiple CMA Award winners Rascal Flatts performing the hilarious country shuffle "Backwards," and an acoustic version of their hit "Bless the Broken Road;" "Everything I Want" and "Game Over" by Hollywood Records U.K. sensation Steve Rushton; and "Crazier" by country-pop singer-songwriter and the biggest-selling U.S. artist of 2008, Taylor Swift.

"Hannah Montana: The Movie" depicts Miley Stewart (Miley Cyrus) as she struggles to juggle school, friends and her double-life as a pop-star. When Hannah Montana's soaring popularity threatens to take over her life?she just might let it. So her father (Billy Ray Cyrus) takes the teen home to Crowley Corners, Tenn., pressing her to choose between her small-town roots and her life as Hannah Montana. Along the way, Miley has an adventure filled with the kind of fun, laughter and romance even Hannah Montana herself couldn't have imagined. Miley performs 10 new songs in the film, including "Let's Get Crazy," "Butterfly Fly Away," and "You'll Always Find Your Way Back Home." The clever mix of music in the film includes pop, rock, country, hip hop and even a familiar Hawaiian-themed melody.

In 2006, Miley Cyrus landed the starring role in the Disney Channel's "Hannah Montana," which instantly became a ratings blockbuster. That year, the first "Hannah Montana" CD came out on Walt Disney Records, becoming the first TV soundtrack to debut at #1 on the Billboard Top 200. The album is now certified triple-platinum.

With her triple-platinum 2007 two-disc set, "Hannah Montana 2: Meet Miley Cyrus" Miley set the stage for her record-shattering "Best of Both Worlds" tour. She also had the #1 film in the country with the Walt Disney Pictures 3-D release, "Hannah Montana & Miley Cyrus: Best of Both Worlds Concert." Last summer she released her platinum-certified "Breakout" album, for which she co-wrote eight of the 13 tracks. Currently, Cyrus is in the third season of her hit television series "Hannah Montana" and recently published her first ever book "Miles to Go."