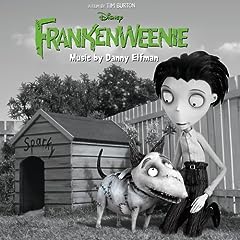 Frankenweenie follows in the footsteps of Tim Burton's other stop-motion animated films Corpse Bride and The Nightmare Before Christmas — both of which featured music by Danny Elfman. "It's something that takes me back to The Nightmare Before Christmas, which also had a very simple story," said Elfman. "It's very pure Tim and very uniquely Tim in that regard—the look and the feel of it and it's great to be able to frolic in that realm."

From the opening scene and the first cue on the soundtrack, Elfman's "Frankenweenie Disney Logo," it's clear that Frankenweenie is not your usual story about a boy and his dog. Several of the characters we are introduced to in the film, for example Victor, Elsa Van Helsing and Edgar "E" Gore were inspired by classic horror films." Frankenweenie is very sweet but then there's this monster movie side of it that I really got to tap into my own roots as a life-long fan of that genre," said Elfman.

Elfman's score, like the story, starts out light and carefree, but then reflects the dark turn taken when Victor loses his beloved dog, and friend, Sparky. The depth and expressiveness of the track "Re-Animation" initially recalls both the ego and excitement of past movie attempts to animate those who have gone before, but then ends with the tender reunion of boy and dog. Elfman's score alternates between the dark elements of Burton's re-imagination of the Frankenstein mythos and the quirky adventures of a boy and his Frankenweenie.

"There's a theme for Victor and his relationship with his dog and then there's actually a theme for Sparky himself," Elfman described. "Sparky's theme is more playful, as dogs are. Victor's theme is a little sadder because it's more about how much he loves and misses Sparky. It is ultimately a story about a boy and his dog and there's almost nothing purer than that."

For more than 25 years, Burton and Elfman have collaborated on some of the cinema's most beloved and recognizable films and soundtracks, including Big Fish, for which Elfman received an Oscar® nomination; Beetlejuice; Batman; Edward Scissorhands; Sleepy Hollow; Corpse Bride; and, more recently, Alice in Wonderland and Dark Shadows.

From creative genius Tim Burton (Alice in Wonderland, The Nightmare Before Christmas) comes Frankenweenie, a heartwarming tale about a boy and his dog. After unexpectedly losing his beloved dog Sparky, young Victor harnesses the power of science to bring his best friend back to life — with just a few minor adjustments. He tries to hide his home-sewn creation, but when Sparky gets out, Victor's fellow students, teachers and the entire town all learn that getting a new "leash on life" can be monstrous.