It's time to play the music... it's time to light the lights... Disney's The Muppets soundtrack features original songs and classic fan favorites 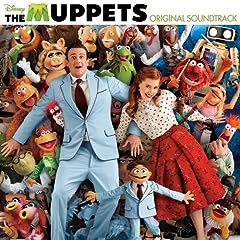 Bret McKenzie, who created, co-wrote, executive produced and starred in the hit HBO television series "Flight of the Conchords," is the music supervisor, as well as the writer/producer of four original songs, including "Life's a Happy Song," "Let's Talk About Me," "Man or Muppet" and "Me Party." McKenzie also produced "Pictures in My Head" and "Rainbow Connection."

The Muppets turn in new renditions for "The Muppet Show Theme" (co-written by Jim Henson) and another treasured Muppet classic, the Oscar®-nominated "Rainbow Connection," as well as the original 1969 version of "Mah Na Mah Na." The felt gloves come off in new Muppet interpretations of Cee Lo Green's "Forget You" and Nirvana's "Smells Like Teen Spirit."

Also included, the original versions of Paul Simon's 1972 hit "Me and Julio Down by the Schoolyard" and Starship's 1985 chart-topper "We Built This City." The album also features 15 dialogue interstitials from the film.

The following is a complete song list:On vacation in Los Angeles, Walter, the world's biggest Muppet fan, his brother Gary (Jason Segel) and Gary's girlfriend Mary (Amy Adams) from Smalltown, USA, discover the nefarious plan of oilman Tex Richman (Chris Cooper) to raze the Muppet Theater and drill for the oil recently discovered beneath the Muppets' former stomping grounds. To stage a telethon and raise the $10 million needed to save the theater, Walter, Mary and Gary help Kermit reunite the Muppets, who have all gone their separate ways: Fozzie now performs with a Reno casino tribute band called the Moopets, Miss Piggy is a plus-size fashion editor at Vogue Paris, Animal is in a Santa Barbara clinic for anger management, and Gonzo is a high-powered plumbing magnate. With a screenplay by Jason Segel & Nicholas Stoller, the film is directed by James Bobin. Featuring signature celebrity cameos, Disney's The Muppets hits the big screen November 23, 2011.

ABOUT THE MUPPETS STUDIO

For more than 55 years, the Muppets have entertained film and television audiences with their blend of heart and humor. The creation of the late visionary, Jim Henson, the Muppets are among the world's most recognized and beloved characters, led by the world's most famous amphibian, Kermit the Frog. Since The Muppets Studio joined The Walt Disney Company in 2004, the Muppets have starred in a series of award-winning viral music videos, multiple television specials, attractions and appearances at Disney Parks, and have an array of Muppets merchandise.

Disney's The Muppets soundtrack will be available wherever music is sold on November 21, 2011.