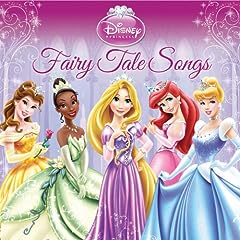 [/floatright]Burbank, CA — They're among the crown jewels of the Disney songbook: classics sung by princesses and princesses-to-be, from Cinderella to the Little Mermaid. Now, Walt Disney Records collects the best of those memorable melodies on [I]Disney Princess: Fairy Tale Songs[/I]. The set includes hits from great Disney animated films going back decades, as well as a brand new song, "The Glow," written and produced for the collection by Adam Watts and Andy Dodd (Kelly Clarkson, Miley Cyrus, Jonas Brothers, Demi Lovato) and sung by British teen sensation Shannon Saunders. Serving as the official Disney Princess anthem, "The Glow" will inspire young girls to believe in their dreams, overcome challenges and fulfill all their wishes. The 14-track album arrives at stores and online retailers September. 20.

Disney royalty represented in the set include Pocahontas, Cinderella, Snow White, Mulan, Belle from "Beauty and the Beast," Ariel from "The Little Mermaid," Rapunzel from "Tangled" and Tiana from "The Princess and the Frog." The new song, "The Glow," arrives at iTunes ( [itunes=the-glow/id463357061?i=463357089] ) September 13. "We were honored to write 'The Glow' and contribute to the amazing history of Disney princesses," said co-writer/producer Adam Watts. "It was a fun challenge to create a song that reflects the unique qualities of a princess, and stand among such an incredible legacy of music."

Little princesses from across the globe will watch seventeen-year-old Shannon Saunders perform "The Glow" on October 2, as Rapunzel is welcomed into the Disney Princess court at a high-profile and star-studded celebration at Kensington Palace, London, UK. Last year, Shannon won the nationwide vote in her native England for Disney Channel UK's "My Camp Rock 2" talent contest, inspired by the Disney Channel Original Movie "Camp Rock 2: The Final Jam." Shannon also recorded "I See the Light," the Oscar-nominated song from the Disney animated film "Tangled," a track featured on the new princess collection.