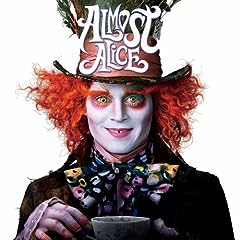 ALMOST ALICE boasts an eclectic array of recording artists with original songs based on some of the most charismatic characters in literary history, such as "In Transit" performed by Mark Hoppus and Pete Wentz. Other artists include The All-American Rejects, Shinedown, 3OH!3, Franz Ferdinand and All Time Low. "Very Good Advice" performed by Robert Smith, is the only song from Disney's 1951 animated film "Alice in Wonderland" that appears on the collection.

Coming to the big screen in Disney Digital 3D™ on March 5, 2010, ALICE IN WONDERLAND is an epic 3D fantasy adventure starring Johnny Depp as the Mad Hatter and Mia Wasikowska as 19-year-old Alice, who returns to the whimsical world she first encountered as a young girl, reuniting with her childhood friends: the White Rabbit, Tweedledee and Tweedledum, the Dormouse, the Caterpillar, the Cheshire Cat, and of course, the Mad Hatter. Visit the official site for more info at Disney.com/wonderland.

The track list for ALMOST ALICE is as follows: