Brian Wilson: In the Key of Disney Available on October 25

A collection of classic songs from the Disney songbook, including favorites from "Snow White," "Dumbo," "The Lion King," and More 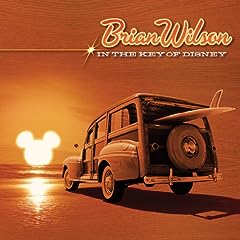 [/floatright]Burbank, CA — Wouldn't it be nice if Brian Wilson put his inimitable stamp on the Disney songbook? That's exactly what the Beach Boys co-founder and musical living legend has done on [I]In the Key of Disney[/I], Wilson's new Disney Pearl collection of songs from seven decades of Disney films. Featuring hits from early-animated classics such as "Snow White" and "Pinocchio," up through last year's "Toy Story 3," the new album boasts Wilson's trademark harmonies, lead vocals and brilliant pop arrangements. Brian Wilson's In the Key of Disney arrives in stores and at online retailers October 25.

In addition to producing the album, Wilson wrote all vocal arrangements and co-wrote arrangements for his band with Paul Von Mertens. Song selection was a careful process for Wilson, who chose from among every era of Disney films, to appeal to kids and adults of all ages. Said Wilson, "Like every kid in America, I grew up loving Disney, especially the animated classics. The songs from those masterpieces were as much a part of my musical education as anything else. So it only made sense that I would want to put my spin on some of those truly great songs."

Drawing on Wilson's genius for layered vocal harmonies and crisp pop arrangements, In the Key of Disney is a must for fans of the Beach Boys and Disney music. Songs included on the album are:"These days, I enjoy watching the classic Disney films with my own children and grandchildren," says Wilson. "It's fun to watch them discover the magic, both in the stories and characters, as well as in the music. I made this album for them, just as much as for me and for my fans, and I hope everyone enjoys it."

Brian Wilson is one of the great American composers of the last 100 years. The Southern California native, along with his brothers, a cousin and a friend, formed the Beach Boys while still in their teens. With Wilson as chief songwriter and arranger, the band not only turned out dozens of hits, but changed music forever thanks to Wilson's innovative melodies and harmonies. Songs like "I Get Around," "Help Me, Rhonda," "California Girls," "Wouldn't It Be Nice," and the #1 smash "Good Vibrations" remain indispensable staples in the rock 'n' roll canon. The band's "Pet Sounds" (1966) is regarded as one of the greatest albums of all time.

Wilson continued to make great music after the Beach Boys, with 10 solo albums including his breathtaking "Brian Wilson Presents SMiLE," which he began recording in the 1960s and finally completed in 2004 to thunderous critical acclaim and Top 20 chart success (as well as earning a Grammy). A member of the Rock 'n' Roll Hall of Fame, the Songwriter's Hall of Fame, a Kennedy Center honoree and recipient of multiple Gold and Platinum records, Wilson has earned his well-deserved pop music immortality. Last year, Wilson made his Disney Pearl debut with Brian Wilson Reimagines Gershwin, which included his versions of great Gershwin tunes as well as two new songs fashioned from fragments given to Wilson by the Gershwin estate.

Brian Wilson: In the Key of Disney will be available wherever music is sold on October 25.