This is my first post to the forum--I just became a member tonight after peeking at some of the forum's discussions during the past couple of weeks.

I worked as a Lifeguard Host in the Fall of 1995 at Blizzard Beach, and am trying to compile a list of the songs featured at the park. If there is anyone out there who can help me with this, it would be greatly appreciated!

Also, I know someone who is going down to WDW next week, and I wanted to give her some money to make some WDW Forever CDs for me. I've called down to the resort and have received different answers as to whether they still exist or not. Any confirmations on this would be great!

The Forever Kiosks have been gone for quite sometime now, unfortunately.
S

(Believe it or not, we've managed to track down all but four of these, marked with an *)

To Eric (and everyone else reading this),

Thank you for passing on the news, albeit it's truly sad to learn that these kiosks are no longer around. Like I said, I worked down there in the Fall of 1995 (before the kiosks and the technology were even thought of). Sadly, I haven't been down there since. I heard of the kiosks about three years ago, but couldn't act on it at the time. Oh well. Here's to hoping that someday they'll do it again. Right?

In the meantime, I'll have to keep humming the tune "As I Was Strolling Through the Park One Day" from Main Street in my head. LOL

Incidentally, I also wonder if they ever made available the Railroad tune "Rolling, Rolling, Rolling Express....Rolling on the Walt Disney World Express" (circa 1990). My parents and siblings have a unique and hilarious "Disney Moment" story tied in with that song.

Thanks again! I will definitely be reading this forum for years to come!

WoW!! THANK YOU SO MUCH!! This Forum is the BEST!

I had a list of about 10 songs that I vividly remember, considering it was almost 7 years ago. I thought it was cool when I realized the version of "Sleigh Ride" that played at the park was the same one that was on the Time-Life Treasury of Christmas CD set I already owned at the time.

Anyway, I've been a professional DJ for the past 4 years, so I should be able to track down most of these songs!

This is the best "souvenir" I could have from that wonderful time in my life. Granted, the songs did annoy me to tears while I worked there on 10 hour shifts, 5 days a week for at about 5 months. LOL

Thanks again, and thanks to everyone who helped compile that list. If I come up with info on the "unknowns," I'll let you know!

To clarify a couple of things --

1) The list has never been published here before (so for anyone else looking in, this is a new one!)

2) There are no unknowns at all on the list -- if you spotted the "Artist Unknown" selection in Hour 3, there's no artist listed on the CD. The disc in question is called "Steel Band Music of the Caribbean". I should have spotted that myself when I posted this version of the list. The original documentation on this also includes disc titles for each selection.

3) The only selections that have yet to be found by those of us assembling this monster are four tracks all sourced from the same "various artists" yodeling music CD, the title of which is "Die Schonsten Jodler Der Berge". If anyone can turn *that* puppy up, we'll have the last fills (Hour 2, Cut 3 - Hour 3, Cut 4 and Hour 4, Cuts 5 & 7)... and at that point, I'll be more than happy to post the whole mess to Usenet. If anyone can turn up that CD, send me a private message. Oh, and big kudos to Shawn, who knows who he is and deserves a ton of credit for getting us this far 2 1/2 years ago when the lion's share of this work was done!

"...Incidentally, I also wonder if they ever made available the Railroad tune "Rolling, Rolling, Rolling Express....Rolling on the Walt Disney World Express" (circa 1990)...."

You are right on about the music being played between Frontierland and Mickey's Birthdayland. That's where my parents' "incident" occurred.

Allow me to share my Disney Moment (for all those who want a good chuckle):

My mother, father, and younger sister and brother (I know, a natural "MFSB" if there ever was) were all on the train after 11 p.m. back in the summer of 1990. We had just watched the Main Street Electrical Parade finish in Frontierland, and we got on the train at the Frontierland station to head to Main Street. As we got on the train, my mother laid her portable cane/chair on the floor. She has had a severe back condition for most of her life, so she had to have it with her, especially for queu lines. The cane/chair was a walking cane that would unfold into a tripod seat.

Anyway, as the train made its way to Mickey's Birthdayland, the cane slipped off the train into the woods near the Indian Village. While it wasn't funny at the moment, we all laugh about it now. To make a long story short, we ended up riding that train around the park about 4-5 times in a row while Cast Members tried to find the cane in the late evening dark. We heard that "Rolling, rolling, rolling express" song waaay too many times. My brother, my father, and I ended up teasing my poor mom that she threw the cane off on purpose, and then we kept teasing her that the Indians from the Indian village snagged it and made it their centerpiece for their village.
;D
So, as you can tell, that song holds a peculiar place in my life, and to be able to track down a copy of it would be fantastic!

If anyone has a copy, I'd love to obtain a copy.

Thanks for bearing with my story!
Tim

THANK YOU for posting that list!!
I worked at Blizzard Beach in food & beverage/merchandise Feb-May '98.

I too must admit it holds a special place in my heart!

THANKS again!
*Tommy
B

Back in July of 2003, I posted a question about Blizzard Beach water park music loops. Several responses were posted, including a complete list of the music as it is heard in the theme park.

Since then, I've been bogged down with work in grad school (I'm a second-year master's candidate at Bowling Green in Ohio) and I just now re-located this forum.

I'm trying to get copies of this music. One of the posters from this forum volunteered to share the Blizzard Beach music with me, but I haven't heard from him since September.

I am willing to try almost any method to acquire the songs from this list. If any of you have any advice, give me a holler! Thanks!

Once upon a time I put together my first playlist of music together for myself in sequential order in iTunes for my listening pleasure. For whatever the reason, I decided to compile tracks from Blizzard Beach using the old "Disney Music Loops" website track information as my guide. It was quite a struggle identifying every track and even required me to scour the internet for obscure alpine/yodelling records and miscellaneous CD's with random tracks that were used. I think I have every track down to a science, but to this day, there is ONE that has evaded me in particular. I remember trying to source the information for the track but I could not come up with what exactly it was or where I could find it. So, I just made a placeholder track for it... which you can see highlighted in this screenshot of the album I put together:

As you can see, this track was simply listed as "Biergarten Medley" on that old site and my research went as far as digging around on a German polka site I can not for the life of me even begin to recall and I couldn't find any particular track with this name... only some albums for sale on their store that had "Biergarten" in the title. I even contacted the site owner to ask if they had any idea what track this was that Disney used at Blizzard Beach and they said they have used several tracks of theirs throughout the parks but they had no clue which one it was specifically. So, obviously, I still have NO idea what this track is or where I can get it to complete my album.

I'm wondering if ANYBODY who knows or has a recording of this would be so kind as to enlighten me about what this supposed "Biergarten Medley" track is and where I may get it (if I can't get a link to just download the darn thing, I don't know). This has been a pain in my side for *literally* YEARS and I have just thought about asking this question here and see if anybody has the ability to bite and perhaps throw me a bone!

Thanks in advance Magic Music peeps!!

10 - Artist Unknown - Fire Down Below

This one is by Burning Spear!

DreamFinder1983 said:
I'm wondering if ANYBODY who knows or has a recording of this would be so kind as to enlighten me about what this supposed "Biergarten Medley" track is and where I may get it (if I can't get a link to just download the darn thing, I don't know). This has been a pain in my side for *literally* YEARS and I have just thought about asking this question here and see if anybody has the ability to bite and perhaps throw me a bone!
Click to expand...

The selection is by Alex Meixner, an accordion player, who played at Epcot Germany's Biergarten for many years.

I'd have to fish out my old induction recording to see if I could put together the source(s).

Here is one of Alex's CDs: 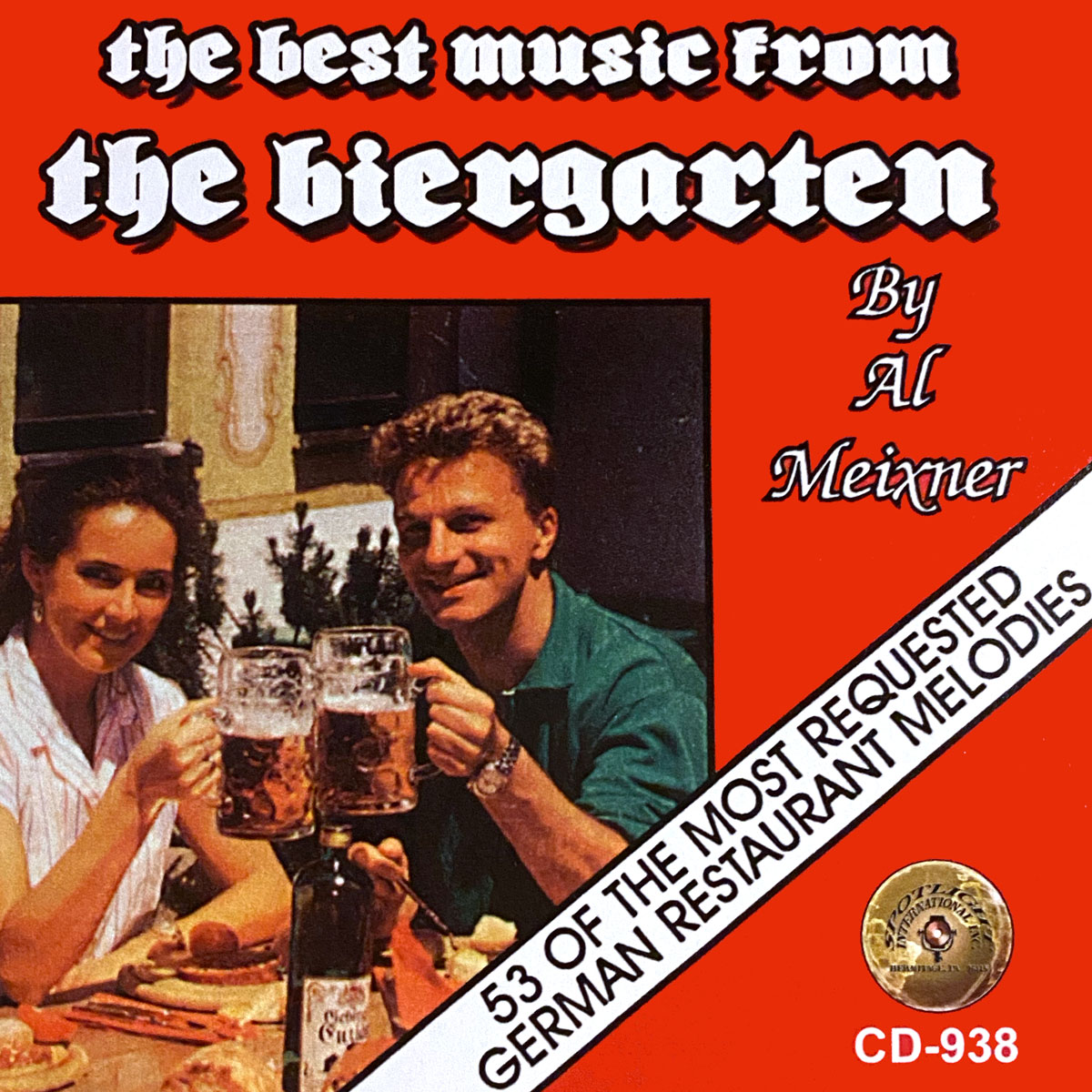 Over 50 of the most popular German biergarten melodies performed instrumentally as Al Meixner did in the German Biergarten at Epcot Center for many years. A best-selling recording at Disney and many other restaurants/German gift shops.

This one is by Burning Spear!
Click to expand...

It's by unnamed artists on Steel Band Music of the Caribbean.
Jay - Magic Music
F

Magic Music said:
It's by unnamed artists on Steel Band Music of the Caribbean.
Click to expand...