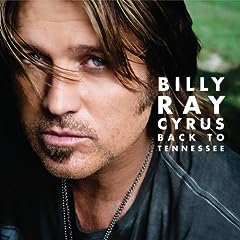 Burbank, CA ? Pushing deeper into his rock and country music roots, Billy Ray Cyrus has released Back to Tennessee, his newest CD for Walt Disney Records. The album features 12 new tracks, including "Butterfly, Fly Away" a moving duet between Billy Ray and his daughter, Miley Cyrus, from the film "Hannah Montana: The Movie," which opened April 10. Back to Tennessee arrived in stores April 7. Cyrus will perform the hit debut single "Back to Tennessee" on "The Tonight Show with Jay Leno" on April 13.

Produced by Mark Bright (Rascal Flatts), the new album celebrates love of home, family and good old fashioned fun. "This album is everything I am at this second," says Cyrus. "It's everything that I've been through and every step along the way to this point. Ironically, sometimes looking back ? in my case, 'Back to Tennessee' ? is the best way to move forward." Songs include: "Back to Tennessee," "Thrillbilly," "He's Mine," "Somebody Said a Prayer," "A Good Day," "I Could Be the One," "Like Nothing Else," "Country as Country Can Be," "Love is the Lesson," "Give it to Somebody," "Real Gone," and the Glen Ballard-produced "Butterfly, Fly Away."

Said producer Mark Bright, "Billy has such a love of family and love of life. This album reveals who Billy is, from the really traditional music to the driving rock-influenced songs to those songs we want to hear on the radio." Added "Butterfly, Fly Away" producer Glen Ballard, "I get chills when I hear Billy Ray and Miley sing. I cherish the privilege to help celebrate the beauty of a father and a daughter's relationship through this song and movie."

Billy Ray Cyrus broke through in 1992 with the 9x-platinum smash hit album "Some Gave All." Since then, he went on to sell more than 25 million albums worldwide, and earned nearly thirty chart singles, including 15 Top 40 charts hits. At the same time he established himself as a successful actor in film and television, first as the title character in the syndicated drama "Doc," then alongside his daughter Miley in the hit Disney Channel series "Hannah Montana." Cyrus' most recent album ? 2007's "Home at Last" ? entered in the Top 20 on the Billboard Top 200, hitting #3 on the Top Country Album chart, while "Ready, Set, Don't Go," a duet with daughter Miley, became a Top 5 country smash.