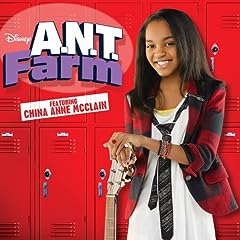 [/floatright]Burbank, CA — Turns out TV's favorite "Advanced Natural Talents" really are naturals. Walt Disney Records is set to release an album of songs inspired by the new hit Disney Channel original series "A.N.T. Farm," performed by cast members from the show. Capturing all of the show's youthful fun, the album features new and classic songs sung by Hollywood Records artist and "A.N.T. Farm" star China Anne McClain, her sisters Sierra and Lauryn, and "A.N.T. Farm" co-stars Stefanie Scott and Carlon Jeffery. The A.N.T. Farm soundtrack, which includes the new single "Calling All the Monsters," arrives in stores and to online retailers on October 11.

"A.N.T. Farm" star China Anne McClain sings six songs solo, including the upbeat "Exceptional," the #1 Radio Disney smash cover of "Dynamite," the breaking Radio Disney hit "Calling All the Monsters," "Unstoppable," the sweetly romantic "My Crush" and a sensational cover of the Christina Aguilera classic, "Beautiful." China and her sisters also star in the "Calling All the Monsters" companion video, which had its world premiere Sept. 18 on Disney Channel.

The series which has ranked No. 2 among kids 6-11 and tweens 9-14, stars China Anne McClain as Chyna Parks, a tween musical prodigy who is enrolled in the prestigious A.N.T. (Advanced Natural Talents) program at a San Francisco high school. Using their multiple musical, artistic and intellectual talents to their advantage, she and her fellow A.N.T.s find themselves having all kinds of adventures.

Disney Channel is a 24-hour kid-driven, family inclusive television network that taps into the world of kids and families through original series and movies. Currently available on basic cable in over 99 million U.S. homes and to millions of other viewers on Disney Channels around the world, Disney Channel is part of the Disney/ABC Television Group.

The A.N.T. Farm soundtrack will be available wherever music is sold on October 11.