A Musical Tour: Treasures of the Walt Disney Archives 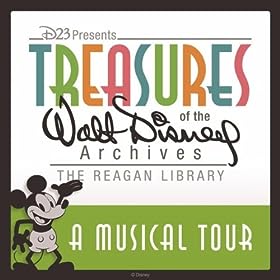 [/floatright]Amazon and iTunes are offering a digital album called [i]A Musical Tour: Treasures of the Walt Disney Archives at The Reagan Library[/i]. The album is an "official soundtrack" for the new Treasures of the Walt Disney Archives exhibit at The Reagan Library; the music is all previously released material from Disney movies and the theme parks, and each track ties in to items on display at the exhibit.

I downloaded the album over the weekend, and I thought it was pretty good; a lot of the music is stuff folks have seen in other compilations, but there was enough movie stuff I hadn't seen before to make the purchase worthwhile. Hopefully, it sells well enough that Disney will consider similar digital releases (old Official Albums, anyone?).

What I see as the biggest downside to this release is that Disney didn't offer some way to purchase a physical CD or at least give folks a chance to listen to the tracks at the museum; I understand that a gigantic run of CDs wouldn't have been realistic, but even if there had been a limited run on sale, I and other visitors would have bought one. I didn't even notice any of the tracks being played in th exhibit - IIRC, they were playing tracks from "Heigh Ho Mozart"!

Premium Member
Playlist Author
Reading it, it seems a good compilation to have in one place but, as you sayl, no physical CD to purchase which means for the likes of me (in the UK), out of reach. It's not possible to purchase mp3s from the US from either source without jumping through hoops via a proxy server or some such fol-de-rol (which I'm not sure is legal or not and I suspect getting someone in the US to buy it for me and then sending it to me would also be illegal) to find a way around the restrictions. No such problems with physical CDs. I can buy those and have them shipped over. :angry:
"The way to get started is to quit talking and begin doing."
J

Having just visited the exhibit about two weeks ago (it's excellent, by the way) I can verify that there are at least some of these tracks playing in the exhibit, so maybe this has changed since you visited. I noticed there were some slight modifications made to some of the exhibits from when it originally was installed. A few objects moved around slightly and the addition of a few new artifacts.

The tracks that I heard while in the exhibit were:

- Walt Disney's Disneyland dedication speech, from the Dateline Disneyland TV segment that plays on a screen in the Disneyland section

- Alice's Theme, which plays in the background of the Alice in Wonderland display

- Star Tours, which plays on a medley loop track from a speaker by the big Maleficent head from Fantasmic!

- Fantasmic! Exit music, which plays on this same loop

- Grim Grinning Ghosts, which plays on this same loop

- probably Yo Ho (A Pirates Life for me), although I didn't hear it when I was in the room, but I'll bet it's on there. I didn't stand there and listen to a complete playing of the track from beginning to end.

- a small piece of Lincoln's speech from Great Moments, heard during a brief clip of the making of the attraction from the video that plays in the room with all the busts of the presidents from The Hall Of Presidents attraction.

Finally, in that Disneyland loop that plays by the Maleficent head, one also hears the full Fantasyland Suite track (about 17 minutes long) from the 50 years of Disneyland box set that came out in 2005, and which is now on some of the Official Albums.
You must log in or register to reply here.
Share:
Facebook Twitter Reddit Pinterest WhatsApp Email Share Link