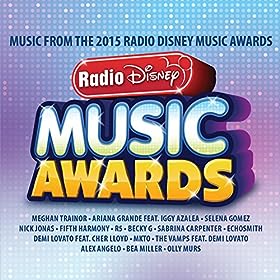 The album includes hits such as "All About That Bass" by Meghan Trainor, "Problem" by Ariana Grande featuring Iggy Azalea, "The Heart Wants What It Wants" by Selena Gomez, and "Really Don't Care" by Demi Lovato.

The Radio Disney Music Awards compilation will be available wherever music is sold on April 21, 2015.